Decision about recruitment of experts is following the formal due procedure, taking time. Experts to be ready after summer holidays (in practical terms). A face to face meeting would be organized by late September – early October among Chair, Secretariat, conveyors (Katrin, Emile, Aitor), volunteers and recruited experts to clarify topics. Location for such meeting TBD (probably Frankfurt).

Formalization of a Data Point Model canonical methodology is not a clear task of CEN business plan, thus other possibilities would be welcomed.

(Andreas) European Parliament to pass the Capital Directive, pre-requisite for publication of DPM (Data Point Model) and taxonomies. Scheduling to be impacted by summer holidays.

Draft DPM on public consultation since May 25: http://www.eba.europa.eu/Publications/Consultation-Papers/All-consultations/2012/EBA-CP-2012-DPM.aspx

DPM refinement works on course with the collaboration of NSAs (DE, ES, UK). DPM is a responsibility of the regulation experts. Not too much to additionally publishing before European Parliament decisions.

(Continuation of past confcalls discussions)

A topic has been presented by a provider in relation with the base items selected for the taxonomy architecture, with three main options:

A) Use traditional semantic base items (asset, debt, exposure; the list is quite short –only 11-). As the XBRL has three “hard coded” dimensions (period, type of unit, entity), the same base item is to be defined up to four times. i.e.: asset-monetary-instant, asset-monetary-duration, asset-percentage-instant, asset-percentage-duration, increasing the 11 base items to near 30. See examples at www.eurofiling.info COREP/FINREP 2012

B) Use the amount type dimension as base item (as Accumulated write-offs, Carrying amount, Comprehensive income, Dividends paid….). The number of members is bigger (about 300), and they are supposedly orthogonal (do not interfere) with the “hard coded” dimensions. Hence, option B consists on identifying a dimension in the model that determines the property to be measured. This dimension should determine the data type and the period type. In the current model, this is out of any doubt the amount type.

A and B comments:

Instead of having the amount type as a dimension and the base item (the one that determines credit / debit) as the primary item, we swap their representation:

By doing so, we obtain several benefits:

– The usage of instant / duration is the one in the standard. By using the base item as primary, we had to include an artificial dimension for the time period.

C) Do not use base items. i.e. monetary-instant, monetary-duration, percentage-instant, percentage-duration and so on (less than 10). This is an orientation to Multidimensional Online Analytical Processing, Radial Viewers (see figure) and Business Intelligence providers.

This is (more or less) the basic approach of SDMX (XML for statistics). Not many other examples on XBRL/XML are well known, as typically XML is designed to be read by humans (hence maintaining semantics descriptions in the base items and schemas). 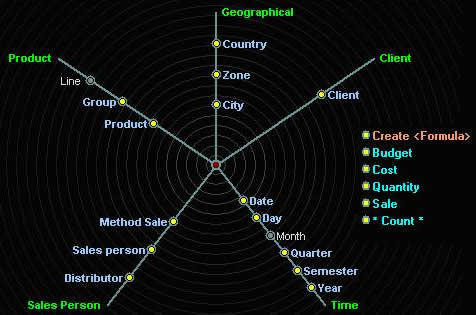 In any case, transforming an XBRL instance document from options A or B to option C are only few tens of XSLT lines of code. The topic is in study in EBA. See background references at http://www.eurofiling.info/dpm/index.shtml

The suggestion of a “Reporting Tool for Undertakings” (as a help for reporting entities and NSAs to use XBRL for Solvency II reporting) has been presented to EIOPA Insurance and Reinsurance Stakeholder Group (IRSG). A tender would be published by end July / early August. Open Source availability is not a must, but a highly desirable feature.

A proof of concept for DPM, taxonomy and architecture is scheduled to be made public during the summer, (also) as a help for better understanding the “Tool for Undertakings” requirements/functionality.

The proof of concept taxonomy is to be based on the two layers approach, to interoperate with both highly/moderately dimensional approaches.

As EBA / EIOPA taxonomies publication are scheduled around October (depending on European Parliament decisions), the 16th Eurofiling Workshop would be nice to be held late November or early December, depending on Parliament. Hosting offers would be more than welcomed!.